What is pros and cons of a WordPress site? 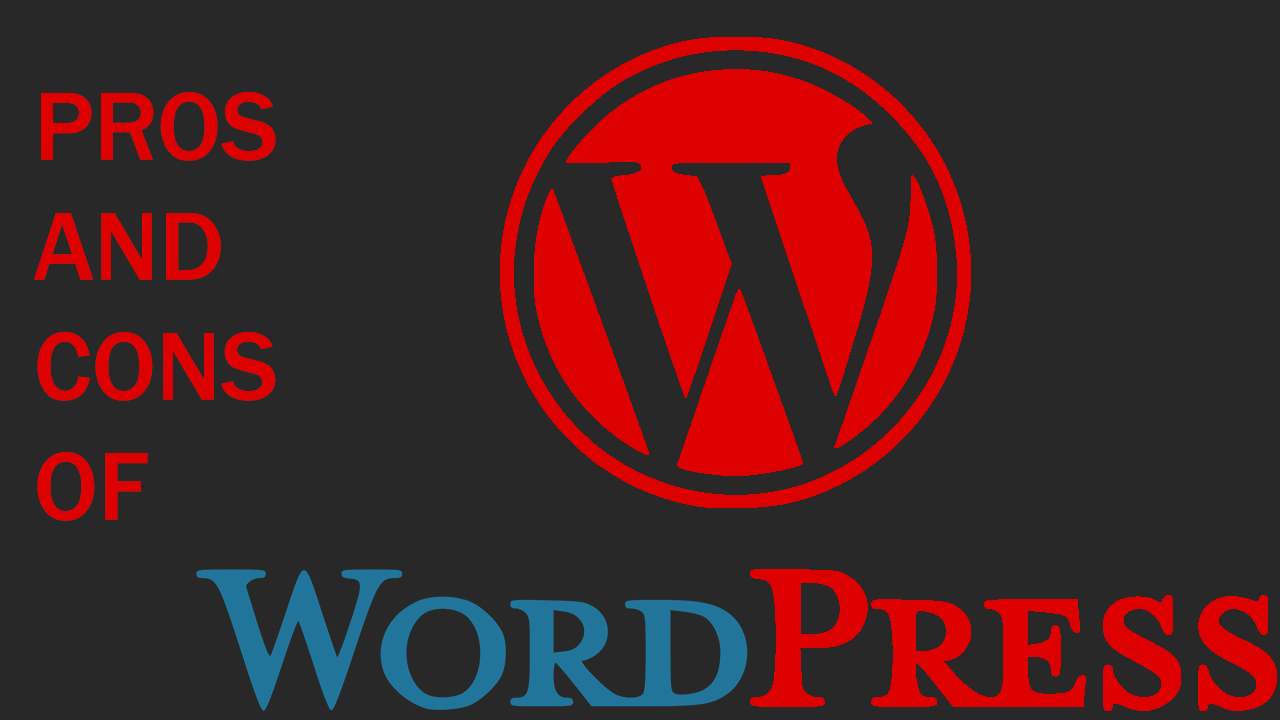 In modern site building, a lot depends on the correct choice of software for the site, the so-called "engine". In this mini-review, I will dwell in more detail on the pros and cons of the WordPress CMS.

During several years of work as a developer and SEO-optimizer, I have dealt with different engines: Joomla, ModX, Opencart, Drupal, WordPress, WebAssyst, etc. And I can state the following: there are no ideal engines. This is due to the fact that the very concept of "site" is very conditional. The same word can mean a project worth tens of thousands of dollars and a modest business card site.

As recently as last month, an acquaintance of mine spent $ 2,000 on the development of a site, and a month later he redesigned it to another CMS, spending about $ 700 more just because he chose a CMS that did not meet his needs. In order not to bite your elbows and not to redo the project that has just been handed over, I recommend that when choosing a CMS, pay attention to its advantages and disadvantages, because it is from a combination of pros and cons that the final choice. Now I will list, without embellishment, the advantages and disadvantages of such a popular engine as WordPress, so that you can analyze how it is suitable for your tasks.

This is the easiest-to-administer content management system I've ever seen, except, of course, for self-written hand-made articles - but their simplicity was rather a disadvantage because it boiled down to primitivism, but here serious functionality is perfectly "served" and is intuitive even for novice users. Of course, certain skills are needed here as well: articles themselves will not add: smile: But compared to other CMS, to deal with WordPress you need 10 times less time and effort.

This is an opportunity to grow different CMS services using plugins. And it is desirable, of course, free. In this, WordPress also has no equal: there are tens of thousands of plugins, they have an excellent rating system and they are installed in a couple of clicks.

How are most plugins installed on Joomla?

First, it is searched for a long and tedious way over the network, then some found version is downloaded, which can contain any code because in 99% of cases it is downloaded not from the author's website, but from file hosting. Then the downloaded file is prepared for uploading in the required format (most of the ZIP archives are not prepared for uploading to Joomla). Then the archive is loaded in the admin area and only then the plugin is activated. Moreover, for example, out of 10 times installed the same sitemap plugin on Joomla - 2 times "did not start". That is, the plugin is worth it, but there is no sitemap, you have to tinker with the code, which you will agree, but from the point of view of the site owner - wasted time or money.

Compared to other CMS, everything happens magically in WordPress. Installing plugins can be compared to installing applications for modern smartphones iPhones or Android. You choose a plugin from the repository, where the latest version is stored with a minimum of errors, you can read reviews of other users and leave your own. Moreover, there are so many plugins that from several options for similar scripts you can easily choose the best one in terms of rating or capabilities. For example, there are more than 15 types of sitemaps in WordPress alone - for every taste! In all other CMS, it's good if you have one or two.

Such simplicity and functionality leads to the fact that both the development and subsequent revisions of the project are really inexpensive. In many CMS, for example, Shop-Script, the cost of almost any revision is measured at least a hundred or two dollars. Don't believe me? Submit the project to a freelance exchange so that you need to properly finish the cart on Shop-Script. You will see at most 5 applications, of which 3 will be frankly random. Competition is minimal since the system is complex and requires very specific knowledge. Accordingly, the price of the work will be appropriate.

Now create a project for WordPress - you will be inundated with requests, and most of them will be in the region of $ 20. This is logical: the system is simple and popular, many programmers and layout designers have already got their hands on it and are ready to implement your requests quickly and practically for a penny. WordPress is perhaps the cheapest content management system to tweak.

Of course, there are faster and more resilient CMS. However, compared to its closest competitors with similar functionality, WordPress is out of the competition. A minimum of unnecessary, a lot of plugins that speed up work and reduce the load on the pages. The very small size of this CMS allows you to economically use hosting space, makes it easier to check the site for malware, etc. By the way, installing WordPress is easier and faster than any other popular CMS.

After installing the appropriate plugins, the control system turns into a perfectly optimized system with CNC, sitemap, autogenerated meta tags and the ability to conveniently edit them manually, without duplicate pages, etc. in almost 2 clicks. As a result, you can significantly save on SEO optimization. For example, if I make a website on WordPress, then I give a discount on its optimization: after all, this system can actually be done faster and easier. But every barrel of honey has its own tar.

Let's move on to the disadvantages. If you decide to make yourself a modern website, then here I posted 15+ free recommendations for website owners "How to create your own website from scratch yourself" and get a sensible result. I tried to make it as brief as possible, and at the same time analyze all the main mistakes of beginners.

This is the flip side of the worldwide popularity of the system. Thanks to the massive use of WordPress, it is profitable for hackers to look for vulnerabilities to it, especially to the very plugins that are used in WordPress. For the sake of fairness, it should be noted that any popular non-commercial CMS, for example, the same Joomla, sin like this. Here the site owner must decide for himself: if he does not incur any serious financial losses from the fact that your site was unavailable once every six months for several hours while the treatment or data recovery after an attack is underway, then in this case the risks are more than justified the popularity of the system. If the disappearance of the site even for 10 minutes is critical for the image or activities of the company, then you should pay attention to the commercial, that is, paid CMS. It is clear that the cost of developing a site increases by about $ 1500-2000 (the cost of a paid commercial CMS with similar capabilities + significantly higher layout prices), but you have to pay for peace of mind, isn't it: smile: In any case, vulnerability is the most serious flaw of WordPress sites.

Therefore, I recommend that after creating a blog or business card site, immediately carry out work on additional protection of the web project. For example, using the powerful packages iThemes Security or the All-In-One WP Security & Firewall Plugin. In this case, although the risk of attacks remains, it is reduced to almost zero. Read How to Protect WordPress from Hacking for Free in 5 Minutes.

Of course, the core of the system is completely Russified: both during installation and immediately after it, work in the admin panel takes place in Russian and other languages. However, some plugins, such as Polls, Tests, Photo Galleries, etc. - sometimes are not translated, and although it is small, it is still a minus of the originally English-language project. But again, 100% localization of all plugins is only available in commercial systems. And the number of plugins in them is incomparably less than for WordPress CMS. Moreover, the owner of the same business card site or catalog is rarely faced with the need to install and configure plugins himself - usually, this is entrusted to the developer.

On the one hand, this is a plus, because the updates contain patches for vulnerabilities, as well as increased stability of the plugins and the system. However, this becomes a big disadvantage if you "shredded" the code of plugins and systems for yourself while developing the site. Usually, only inexperienced programmers and layout designers do, who do not know and do not want to know the internal structure of WordPress. But as a result, you can really face a situation when you need to update 5 plugins, and when they are updated, half of the site crashes. To avoid this drawback, contact trusted developers who have made more than one business card site or blog on WordPress CMS - they have already gotten their heads up.

However, you should definitely check the new site for the correctness of updating after creation. Just reinstall all plugins and system core. If everything is done correctly, the site will work as before. Alas, it is not always possible, even theoretically, to make changes without consequences during the update, but this must be strived for. As my experience shows, 9 out of 10 business card sites on WordPress CMS can be designed so that the update does not harm them in any way, but only strengthens their protection.

CMS WordPress is great as a basic platform for:

It is not a good idea to use WordPress for online stores that need specific functionality: different payment methods, personal account, multicurrency, customizable shopping cart, etc. In this case, all this will have to be increased by a multitude of specific plugins and their "finishing" to the desired state, which will negatively affect the performance and updateability of the system. There is a risk of getting a completely non-renewable version of the site with an almost guaranteed need for a complete redesign of the entire site in 2-3 years after the start of use, or even earlier. The exception is small, simple in functionality stores, for example, with several categories and 50 or 70 products. In this case, the use of a simple and fast CMS WordPress will be justified. WordPress is also not suitable for any large-scale Internet portals: alas, it is not obvious to all site owners that highly specialized, refined, and sometimes exclusively self-written CMS costing from $ 5000 is needed for such projects. WordPress is also not suitable for really serious corporate websites, for example, in the financial sector, where you need maximum protection against hacking and tight integration with cashless accounting systems like 1C.

However, the owners of such companies usually do not lack funding and can easily afford a site on a commercial CMS, for example, on the same Bitrix for $ 5-10 thousand. Thus, the "fiefdom of WordPress" is simple, but functional sites such as blogs, business card sites and directory sites, usually developed for small and medium-sized businesses, costing up to $ 1000, in which this CMS beats off every penny invested in it when developing.